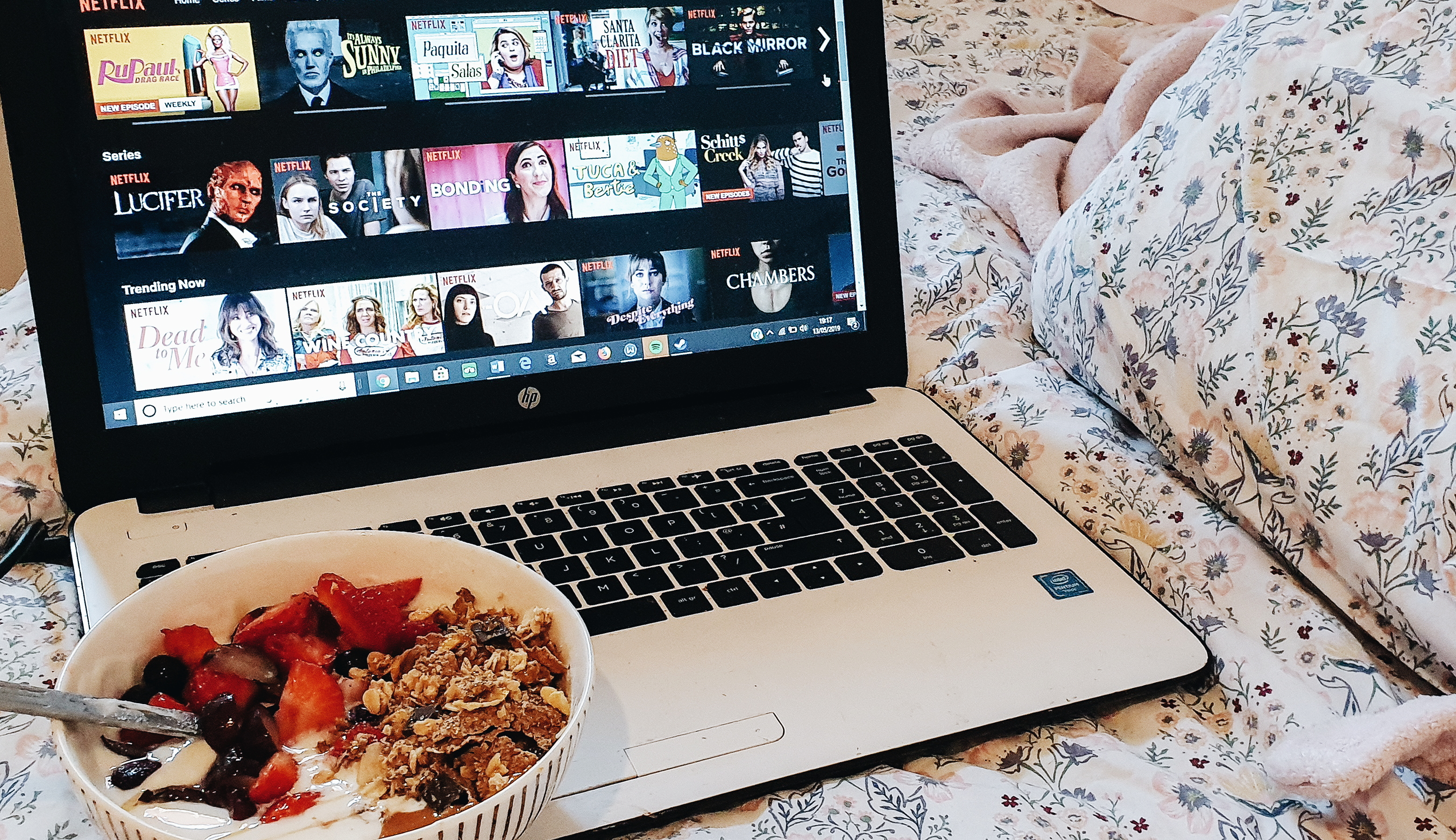 Whilst I do love to read, one of my favourite ways to unwind is binge-watching a good TV show. I’m almost always on the hunt for a new series to dive into and, if you read my Little Things posts, you’ll know I’m always gushing about my latest TV favourites.

In today’s post, I wanted to talk through a selection of my all-time favourites that I’ve loved over the years. Honestly, I’m doing this more so because I’m finding there to be an absolute dearth of things to watch at the moment, so if you’re yet to watch any of these I’m going to live vicariously through you. Many of them are pretty popular, but hopefully, you find something new for your next TV-binge. There are some notable exclusions (The Good Place, Jane the Virgin, etc…); I’ve solely listed the shows I would be excited to watch again. So, without further ado, here are my Top TV Shows.

Now, I haven’t watched the original British version so I can’t make a comparison. However, in The Office US, I just love Steve Carrell’s lighthearted portrayal of the socially inept paper company boss. A mockumentary on a group of people working 9-5 jobs in an office seems, on paper, extremely boring and lacklustre. The Office, however, is hilarious. The frequent fourth-wall breaks in particular never fail to make me laugh. Thanks to this show I’ve fallen into the habit of staring down an invisible camera lens like Jim whenever someone says something stupid or something mildly inconvenient happens. With amazing characters and both hilarious and touching moments, this is, quite easily, one of my favourite shows of all time.

Phoebe Waller-Bridge is a genius. Fleabag is a smart, witty and dark British comedy which follows the life of a young woman attempting to navigate modern life in London while trying to come to terms with a recent tragedy. My favourite thing about the show, similar to The Office, is how she breaks the fourth wall. I love how she can subtly communicate her jokes and motivations with just an arch of the eyebrow or a nod at the camera. The drama, depth and twists make this much more than a sitcom and should be on everyone’s watch list.

I couldn’t write this post without including this. Does it really need an explanation? Not a day goes by when at least two or three Friends references don’t come to mind.

Another comedy series I had to mention, this one following a diverse cast of characters in Brooklyn’s 99th precinct. This show’s magic is truly down to its characters; the pranks they pull, the jokes they make, they bounce off each perfectly. I have no idea how they manage to keep a straight face while performing their scenes, especially Captain Holt who always manages to maintain his strict iron-faced facade. Each episode includes humorous subplots within a great underlying storyline throughout as we continue to watch characters evolve. This is perfect for detective show and sitcom fans alike.

This is a British sitcom that follows six students who are embarking on the most turbulent period of their life: university. I started watching this during the second year of my degree making it all the more hilarious. All the characters are unique and are heightened versions of the people we meet at university. Take JP, the posh rich “lad” who overuses the word “banter”. He cruises through his degree because, regardless of the outcome, he’ll find a good job thanks to his privileged background. I certainly know a few JPs. They’re flawed, they’re human and they’re hilarious. Fresh Meat perfectly depicts the realities of university life and addresses major anxieties in a way that feels relatable and refreshing.

This is one that really doesn’t need introducing. I was quite late starting this one when I binge-watched the first six seasons back in 2017. In case you really have been living under a rock, this is a fantasy drama series which follows a number of noble families vying for power in Westeros. While there are fantastical elements (dragons, zombie-like ice creatures who are a supernatural threat to mankind, characters coming back from the dead) there is a lot of heavy politics across the Seven Kingdoms too. As of this week, Game of Thrones drew to a rather underwhelming close. The final season’s cinematography was outstanding but, at only 6 episodes, it felt rushed. Nonetheless, this show was a phenomenal experience. It has broken new grounds and done so much to make epic fantasy mainstream and accessible. The shows’ creators did an incredible job. I’m going to miss it terribly.

This is another series around which you probably haven’t avoided the hype. It follows the disappearance of a young boy and various supernatural happenings in a small town in Indiana in the 1980s. Rather than following detectives, the show takes the perspective of the boys’ friends, and the chemistry and performances of the child actors are incredible. I love the 80’s setting combined with the dark, edge-of-your-seat atmosphere of the show. It’s just so captivating and I’m really looking forward to its return this year.

Breaking Bad is about a high school chemistry teacher who is diagnosed with inoperable lung cancer. Given only years to live, he decides he has nothing to lose and embarks on a career of manufacturing and selling methamphetamine to secure his family’s future. With the help of one of his former students, he soon becomes a major player of the drug trade. I never thought I’d like this one but I watched the first episode and was immediately hooked. The performances and chemistry between the two protagonists are unmatched. Walter White, in particular, played by Bryan Cranston will make you feel for him and at times will even turn you bad. He blurs the line between good and bad. As they progress on their venture of drug and crime, there are so many twists and tiny details that shape this series into a masterpiece.

This is intriguing mystery drama is based on the same-titled best-seller by Liane Moriarty, “Big Little Lies” and is all about female power. The casting is amazing; Reese Witherspoon, Nicole Kidman and Shailene Woodly each playing three very different mothers residing in the ultra-wealthy tranquil beach town of Monterey, California. As the dark murder mystery unfolds, we also meet Zoë Kravitz and Laura Dern as the mothers continue enduring family drama, school politics and abusive partners. They all gave incredible performances and the upcoming arrival of Meryl Streep makes me even more excited for season 2.

Another series set to return to Netflix soon is Spanish-language heist drama series about a group of robbers who assault the Factory of Moneda and Timbre. Their perilous mission is to carry out the most perfect robbery in the history of Spain and take home 2.4 billion euros. This is an amazing series with incredible acting. Every single episode is so thrilling and unpredictable, never lacking suspense or surprises. If you’re a fan of heist stories, I couldn’t recommend this more.

This show was all the rage at the start of 2019 and like everyone else, it had me hooked. You’re probably pretty clued up about the show’s premise. But to summarise, ‘You’ follows Joe, a bookstore manager who relies on his savvy Internet know-how to make the woman of his dreams fall in love with him. He is willing to remove any obstacle that stands in his way of getting close to her. I don’t think I’ll ever be over that ending – I have so many questions! I’m also baffled at how I can route for the psychopath protagonist. I can’t wait to see what season 2 has in store.

This is a gripping anthology series that examines how and why ordinary people commit brutal crimes. I flew through Season 1 with the shocking story of Cora and Season 2 was even better. Detective Ambrose returns to his hometown to investigate the murder of two parents by their 11-year-old son with no apparent motive. I flew through the eight parts in days. This is a show that will keep you guessing with a twisty story that constantly surprises but holds together all the way to the end.

This is an uplifting, inspirational show in which The Fab Five are on a mission to help transform a diverse group of people and help them learn to love themselves. Queer Eye is so much more than just a makeover show. The guys bring joy to people’s lives and advocate the importance of acceptance, not tolerance. The latest season, in particular, is focused on self-love and reinforces the importance of self-care. It’s such a feel-good show. Although, I am always left scrubbing away the remnants of my mascara tears on my face after finishing each episode. Everyone needs to grace their screens with The Fab Five.

I was so late to the game with this one. I started season 4 a couple of months ago, and oh, it’s addictive. RuPaul searches for America’s next drag superstar through a contest of glam, glitter and weekly lip-sync battles. There’s fiery drama, challenges, fashion design malfunctions and modelling excitement. Think America’s Next Top Model meets Project Runway, only 10 x better.

The Great British Bake Off

This just had to receive a mention. Every year I always become overly-attached to the contestants as they try to impress the judges in hope of being crowned Britain’s best amateur baker. This show makes my bakes look like a four-year-old’s been let loose in the kitchen, and are put to shame by the bakers’ orange and cinnamon infused creations. Nonetheless, I’m always left starving and itching to get my Mary Berry on and bake up my own (not so) show-stopping chocolate cake. I can’t wait for its return in autumn and for the cake-sized hole in my heart to be restored.

Have you watched any of these shows? What are some of your all-time top TV shows?

Styling Your Home with Photowall

The 10 Most Underrated Netflix Shows

Why You Should Make Time for the Things You Love

Persuasion
by Jane Austen
“I hate to hear you talk about all women as if they were fine ladies instead of rational creatures. None of us want to be in calm waters all our lives.” I’ve only read two of her novels, but after reading Persuasion, I’ve fallen irr...
tagged: classics, favourites, fiction, and romance

Autumn
by Ali Smith
2019 seems to have become the year I read strikingly unique works of fiction that take the art of writing to new extremes. From Max Porter’s Lanny to Ocean Vuong’s On Earth We’re Briefly Gorgeous, Ali Smith’s Autumn is another novel to w...
tagged: contemporary, cover-appreciation, fiction, library, and series

Legend
by Marie Lu
2.5 stars YA dystopian novels were my favourites to read while I was in school, so I was intrigued to see if this would live up to my 15-year-old self’s standards. I’m not sure whether it’s because I’m older, or because the book is ...
tagged: dystopian, fiction, romance, series, and young-adult

“What my uncle said made me think. I had resente

Over my month break, I managed to resist buying ne